All The Exciting New Ways To Use Matcha - by Julie Morris 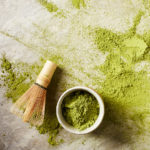 Working as a “superfood chef,” it’s safe to say I have a lot of fascinating ingredients that pass through my kitchen. Nevertheless, I’ll be totally frank with you: I was over-the-moon thrilled when Navitas Organics announced the release of their brand-new organic Matcha Powder. Why? Because, not only is this green superfood so very good for you, but it’s also profoundly versatile! We’ll get into the health benefits of matcha in another post soon, but in the meantime, let’s talk about some of the top ways we can use this incredible ingredient!

Drink it.
The most obvious use for matcha is in beverages. As a long-standing tradition in Japanese culture (as in thousands of years), matcha is combined with warm water in a shallow bowl and whisked together into a concentrated tea. If you’re not feeling particularly purist, more indulgent variations can be created too, such as creamy matcha lattes (hot or cold), made particularly delicious using almond or coconut milk and a touch of vanilla to balance. Lastly, matcha can be added to smoothies too! The mild green tea flavor is very compatible with fruits and vegetables.

Pour it.
Matcha powder can make sauces extra special. Whisk it into vinaigrettes, cook it into sweet sauces, mix it into frosting, or fold it into party dips (hint: matcha guacamole is surprisingly good!). Matcha will impart a very light green tea flavor and a green color.

Bake it.
One of the wonderful things about matcha is that its health benefits are not dependent upon it being consumed in a raw state … which means, look out baked treats! You only need a little bit of matcha per recipe, making it exceptionally easy to add into cookies, cakes, muffins, waffles, bread, and baked goods of truly all varieties. Just remove an equal portion of flour to the amount of matcha you’re adding (usually about a teaspoon to a tablespoon), and the sky’s the limit in terms of creativity. Case in point: try my incredible matcha granola.

Freeze it.
Aside from a traditional tea, probably the second-best thing matcha is known for is as an addictive green tea ice cream found at Japanese restaurants. Just like we talked about with lattes, that green tea + cream + vanilla + sweet combo is a fool-proof winner, and ice cream is a prime example of this in action! But other frozen desserts also do well with matcha upgrades too, like popsicles, granitas, ice cream sandwiches, and even whipped cream, so don’t stop short at the ice cream scoop.

Garnish it.
Face it: matcha powder is PRETTY. Its chartreuse color is both vibrant and rare, and adds intrigue to your plating when used as a “dust” – which is just a fancy way of saying a very light sprinkle. From a slice of chocolate cake to a platter of roasted vegetables, matcha makes a beautiful finishing touch.

Add it.
Just add it. It’s so easy to use this superfood powder in your favorite recipes, the only question you may be left with is how you ever got along without it.

The post All The Exciting New Ways To Use Matcha appeared first on JulieMorris.net.