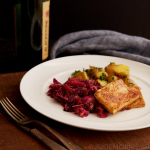 You can trust that it came as quite the surprise to me when I asked my S.O., Oliver,  for a holiday dish request and his answer was… “cabbage.” In all fairness, he’s fully German, with culinarily-gifted grandparents that have spoiled his tastebuds with decades of wholesome, comfort food know-how.

As a cabbage lover myself, I was initially excited to create a savory pot of winter veggies, until he surprised me yet again, telling me it was in fact “sweet cabbage” that we were after. Sweet cabbage? Now I was definitely out of my comfort zone. Urgently, we called his grandmother (Oma). I listened as she described in detail, while Oliver quickly translated, the magic of sweet cabbage. A couple hours, one big cabbage pot, and a few superfood tweaks later, and there it was, in all its fuchsia glory. And within one bite, I too became a sweet cabbage believer.

This vibrant sweet and sour winter recipe makes a balanced (and beautiful!) side to heavier dishes like seared tofu and potatoes.

Cut the cabbage in quarters, and cut out the core. Chop the quarters into ½-inch cubes.

Heat the oil over medium-high heat in a large pot. Add the onion, and sauté until soft and caramelized, about 10-12 minutes. Mix in the apple, cabbage and water, and cook for 25 minutes, stirring occasionally. Add the vinegar, coconut sugar, cloves and goldenberries and toss well. Reduce heat to medium-low and cook for 20-25 minutes longer, until cabbage is soft. Remove from heat and mix in the salt. Serve warm or at room temperature.