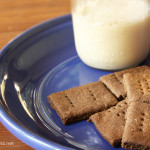 I sharply remember the battles of preschool naptime. All of us classmates, lying on the floor atop of big blue vinyl-coated foam mats in a small room darkened by curtains, coaxed into a daytime sleep. Was no one else aware there was playing that needed to be done? Would no one rebel with me? I fought as hard as I could while lying there, with a carefully honed foot fidgeting technique that was casual enough to seem accidental, yet frequent enough to send a clear message “I am not asleep.” Being a little kid is tough sometimes.

But vintage naptime had one good thing going for it that even my 3 year old self could appreciate: the post-sleep graham cracker snack. This was a very exciting point in the day, where if our 30 minutes of rest was a success, we each received 2 crackers (which broke into a total of 8 rectangles) accompanied by a glass of juice. The world was a much better place when there were graham crackers around.

No extra motivation is needed for naps these days, but the graham cracker lure has far from ceased. I mean, just think about them: kinda like a cookie, kinda like a biscuit, it’s always a good time for a graham cracker – am I wrong? I like to make mine with buckwheat flour – one of my favorite flours to use for its generous flavor. This is definitely graham cracker version 2.0 (and also free of gluten and dairy), with a revamped ingredient set including ground flax for extra nutrition, sweet mesquite powder for extra flavor and protein, palm sugar for a brown sugary goodness that has less of a glycemic impact, and coconut oil because, well, coconut oil is just good in everything. These are really, really good – and even better with a smear of almond butter. You can also add in a bit of cinnamon for a spiced-up twist. Playtime.

In a food processor,* pulse all the dry ingredients together, including the sugar, until combined. Add in the remaining wet ingredients, and process until a dough has formed. If dough is too dry, add additional almond milk, one tsp at a time. Dough will be firm and slightly sticky. Divide in half and refrigerate for 1 hour.

Preheat the oven to 325 degrees F. Place one chilled dough half on a large piece of floured parchment paper (use additional buckwheat flour or preferred kind). Place a second piece of parchment paper on top, and use a rolling pin to roll very flat – about 1/8 inch thick. Place on a baking sheet, and carefully remove top layer of parchment. Using a pizza cutter or ravioli roller (or simply a knife), cut the dough into squares. Use a fork to score the crackers with decorative dots. Repeat with second dough half and place on a second baking sheet. Bake crackers for 22-28 minutes or until dried out but not burned. Remove from oven and let cool for 5 minutes, then place crackers on a wire rack to finish cooling and become crisper. Makes about 5 dozen 2” crackers, and will keep in an airtight container for about 2 weeks.

*You can mix all of this by hand, but it’s infinitely easier with a food processor