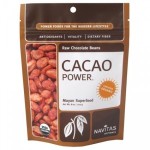 Not that I ever really need an excuse to eat chocolate, but I have to admit the recent media blitz regarding cacao’s “extreme vitamin C content” had me reaching for an extra piece or two. Night-time newstations buzzed, and highly trafficked websites such as MSNBC featured special reports touting raw cacao as a food with “extraordinarily high [levels of] vitamin C.”

Extraordinarily! Well, perhaps just ONE more bite then . . . (but last one for real FOR REAL this time) . . .

Yet despite this popularized news, superfood company and cacao manufacturer Navitas Naturals has just released what they consider “the honest truth” — exposing that even when processed at low temperatures (i.e. “raw”), there is actually no vitamin C (ascorbic acid) present in cacao.

Since 2004, Navitas Naturals has meticulously conducted lab tests directly looking for vitamin C content in raw cacao — each test coming up consistently negative. Always seeking new exciting health advantages of the natural foods they sell, having a firm grasp on nutrition is an important part of the company’s platform. Yet with the current media claims on cacao’s high vitamin C content pointing directly against their own findings, the Northern California-based company decided to let science settle the score.

The multi-platform test performed included using two separate laboratories and three different analytical methods: High Performance Liquid Chromatography (HPLC), Capilary Electrophoresis (CE) with UV detection, and Titration. Though all three methods have their place in the scientific community, Titration is the most commonly used method in the food industry when determining vitamin C (ascorbic acid) content. However, there is a critical detail within the Titration method which is easy to miss when testing raw cacao’s vitamin C content: Titration is unable to differentiate the vitamin C (ascorbic acid) from the vitamin’s analogs. Consequently, many companies experience test results known as a “false positive.”

Navitas Naturals has a different preferred method – HPLC – which looks directly for vitamin C (ascorbic acid), and not just the analogs. And although the analogs in the Titration test predictably showed a “high vitamin C” false positive, the HPLC method clearly documented a negative vitamin C reading. After utilizing the CE method for a third round of testing, the reports again returned consistent with the negative HPLC results.

To cross all their t’s and dot all their i’s, Navitas then tested their cacao products against one of the largest raw cacao brands in the United States using the Titration and HPLC methods. True to all previous findings, the results confirmed raw cacao, regardless of source, has no vitamin C (ascorbic acid) present.

So here’s the honest truth: cacao is a tremendously beneficial superfood — serving as a rich supply of antioxidants, one of the highest natural dietary sources of magnesium, and containing an impressively high iron content alongside many other essential minerals. Navitas Naturals’ raw cacao powder, for example, has a documented score of a 950 ORAC units per gram (95,000 per 100g) — which is huge! You only need 6g of this organic raw cacao powder to exceed your daily ORAC need as per USDA recommendations. This “real chocolate” is 100% a health food. But as nutrition is a quantifiable science, it is important to be clear on one thing: vitamin C is one benefit cacao does not provide.

And now, yes, back to your regularly scheduled chocolate consumption.