What exactly is an adaptogen? by Julie Morris 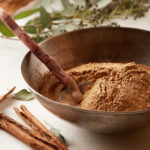 Sometimes a health term becomes so intertwined with the way we talk about nutrition – let alone our core food philosophies – we can lose sight of the actual meaning. Such is often the case with adaptogens. Adaptogens are very much a buzz word in the superfood world, with “adaptogenic benefits” increasingly listed alongside other (much more quantifiable) assets like “high in calcium.” We know adaptogens are good, but what exactly are they, anyway?

While it’s easy to get into the weeds on the science of adaptogens, the simple meaning rolls off the tongue a bit more easily. At their essence, adaptogens are what they sound like: special foods that can help us biologically adapt or adjust to our environment, through aiding the way we physically respond to and manage stress. It’s important to note that this is not a trait many foods have: only 1 in about 4000 types of plants are considered an adaptogen, so it’s a rather special quality. Some of the most popular adaptogenic edible plants include maca, goji berries, ginseng, holy basil, licorice, and some medicinal mushrooms. These foods are touted to help increase energy and endurance, as well as balance hormones (particularly cortisol). Simply put: when you think adaptogens, think “balancing” and “normalizing.” (1)

But let’s look at these traits a little more closely. The concept of adaptogens was first introduced in 1947 by Soviet physicians, and formally defined in 1969 by scientists Israel Brekhman and Igor Dardymov. These experts outlined three main points: (2)

And so, here’s where the definition gets tricky. Although we refer to foods as “an adaptogen,” what we’re really describing is the loose adaptogenic quality of stress-busting adrenal support. Each adaptogenic plant has a unique set of phytochemicals (plant-based chemicals) which enable it to steer body function to normalization. But the components that promote this healing are different from plant to plant. If this sounds vague to you, you’re right. The deep end of the nutritional science pool is riddled with complexities like this – think of antioxidants, for example. Most people assume that antioxidants are a stand-alone thing, and yet no such singular thing exists. Rather, “antioxidant” is a quality – the quality of exhibiting a protective and restorative activity in cellular function. Take Vitamin C, which is obviously a vitamin, but also showcases antioxidant activity, thereby making it an antioxidant as well (technically an antioxidant vitamin). Maca is a root, but also showcases adaptogenic activity, thereby making it an adaptogen (technically an adaptogenic root). Essentially, adaptogens are really only a noun when referring to the entire class of adaptogenic plants, and are more accurately just describing the normalizing action of an ingredient’s relationship with the body.

Nutrition can be as simple or as complex as a person chooses to make it. While the detailed science around adaptogens is fascinating and continually growing, the most important thing to remember is that adaptogens are one of the best-kept food secrets of maintaining a balanced lifestyle. Seek them out whenever you can!

The post What exactly is an adaptogen? appeared first on JulieMorris.net.