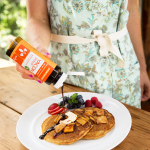 Sliced thin and sun-dried and you’d think you were eating some type of fancy smoked apple. Boiled into a syrup and you’d swear that delicious drizzle was some kind of artesian caramel. The truth is, though yacon has all of the flavor appeal of a high-end sweet recipe, in reality, it’s simply a humble yet versatile root that looks like a potato … a root that’s been cherished by Peruvians for thousands of years.

But yacon’s popularity is not solely due to its flavor – its health benefits are what make it really shine. Often used in Peru in diabetic-sensitive diets, yacon provides the sweetness needed in recipes at a very low-sugar cost. Aside from a low glycemic index, yacon’s sugars are primarily composed of a component called “FOS,” short for fructooligiosaccharides. FOS is essentially a type of low calorie, non-digestible carbohydrate that tastes like sugar on the tongue, but is not processed as sugar by the body … and even offers health benefits such as promoting healthy bacteria balance in the digestive tract (aka, improving digestion!).

One of the smartest sweeteners around, this low calorie ingredient is the perfect way to dress up a stack of pancakes, drizzle over oatmeal, or mix into yogurt (try almond yogurt with a drizzle of yacon and a few chopped strawberries – YUM!). A little yacon goes a long way to elevate recipes to delicious caramel-esque heights, and make a healthy life a little, well, sweeter!

Try one of these delicious yacon-infused recipes: